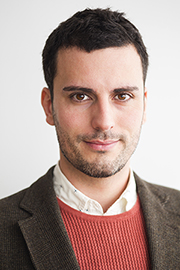 Diego Miralles is an ecohydrologist by training and holds a PhD from VU Amsterdam in global hydrology. After a period as lecturer at the University of Bristol (2011–2014), he joined Ghent University in 2014, where he is currently research professor in Hydrology and Climate. He leads a team of researchers focused on the study of hydro-meteorological extremes and land–atmospheric feedbacks. A European Research Council (ERC) grantee, he is partner/P.I. in several international projects from (e.g.) ESA, BELSPO or the European Commission. He has a diverse expertise in the measurement, modelling and remote sensing of different hydrological variables. Diego is also member of GCOS and the steward for the Land Evaporation Essential Climate Variable (ECV).

In DOWN2EARTH, Ghent University is in charge of the study of land cover changes, their causes, and their influence on hydrological patterns, including rainfall. To this end, a process-based Lagrangian framework co-developed at Ghent University will be used to quantify links between historical land use changes, precipitation and water availability in the Horn of Africa drylands. Moreover, Ghent University will orchestrate the data assimilation of different satellite observations into the hydrological model, which will be developed to assess climate impacts on water and food over various planning horizons.